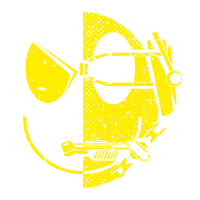 Interview with Acid Steve. The acid techno DJ/producer is from London, UK, and runs Avinit Records and Pounding Warehouse Recordings, his new label which has just released its first vinyl and several digital EPs.

Tell me about the new label – what is the concept?

Originally Pounding Warehouse was started as a label to release banging techno. My first idea was to keep it techno (and have acid techno released on my other label Avinit Records).

Then I realised that I couldn’t release 3 or 4 tracks at a time and not have acid techno in any of them – it just didn’t feel right, was like doing the dirty on your other half.

So I relaunched Pounding Warehouse as a label for both techno and acid techno. Digital releases will be out every few weeks, and the first vinyl release is out now (vinyl is at SUF and Biri with digital on Bandcamp), with tracks from A.P. and Tassid and Eski and a couple from me, one side acid techno and one side techno.

The plan is to get both techno and acid from underground artists out there to the world, where it deserves to be. So I’ve managed to twist the arms of loads of wicked producers who are all on board, with more to come. Any producers with banging music out there, get in touch!

What is the underground scene like in the UK?

Rude Awakenings is building stuff in Ipswich – me and loads of others are playing here on 25 Jun and you’re all invited. Bristol is banging in every way, in techno and politics (#killthebill) so there’s always cool stuff happening there. Brighton and the coast has some wicked underground events, London of course is London acid techno, with soundsystems gearing up for some noisy warehouses, Stay Up Forever and Hydraulix doing big things. Birmingham looks kicking with the Collide crew, Dirty as Funk further north… Basically everyone in the underground scene is taking over everywhere which sounds good to me.

The best thing is how it’s way beyond the UK, with crews releasing loads of vinyl and digital acid techno. Over lockdown I did a couple of cool live streams with Techno Route and Technopride in Brasil. Stuff like that was so important in lockdown, when they got in touch it was at the end of summer and it was like there was no summer, at least for parties… but it was a proper buzz to do the streams as I could treat them like a gig as much as possible, promo, sorting out tunes, making tracks to play just for the sets. Plus I managed to sign a belter of a track from Marcio M and Tiago Santos for a future Pounding Warehouse release, and also am hearing some wicked stuff from people like Stefano TT, Acid Chochi, Rafael Araujo. So that was really cool to connect with those guys.

Also Barcelona where the crews are really on it. Acid Resistance have some wicked releases, Acid Lab too, I was very happy to release an acid techno track for them during lockdown. Seon is absolutely blowing up with his productions, tough as fuck techno from Valencia.

Poland is another place where it’s always a wicked vibe and is proper on fire for acid techno producers at the moment. Check out the label Acid Addicts and Polish producers like Ciucek,Miro Hardparty, Vlado, Jamal, Noradrenalin. In Russia there’s Dima Interstate’s label Interstate One, that has a massive catalogue of acid techno.

There’s loads of quality stuff coming out of Ireland as well, David Oblivion and the Interruption label, No Comment! and Transformer Sounds, Nesbit and Furious Wax, and Illegal Swede who has been on Sterling Moss’s label Rebeltek.

In the US there’s Lethal One and his Official label, some full-on 303 tunes on that label, Sylmar Acid Test is a proper goosebump tune that does crazy things to acid techno dancefloors. Also check out Jack Wax of Flatlife, who is firing out the acid from all angles from his acid techno HQ in the Netherlands, somewhere I was also lucky to play to an amazing acid crowd in Eindhoven a while back.

And of course in France, the last place I managed to play before lockdown, where the acid scene is massive, Krismix’s label Cerber has been putting out some top quality acid techno and full-on techno.

So the UK is just one part of a buzzing global scene really. Also got to say a massive respect to the DJs keeping the vibe alive during lockdown with live streams, from Czech to as far as Australia. Especially thanks to those who had me on, Loud by Design and TNI Events, Olivier FX/Dark Room, Brooksie, Pat Hurley, Technopride, Technoroute, Bassline Ben and Aggie Acid Line (am playing a show for their Acid Scum show in June I think).

Who are some producers to look out for?

Well this is acidtekno.com so I guess most readers all know a lot of the acid labels and producers from Stay Up Forever, 303 Alliance, Planet Acid Techno, Rebeltek, and Avinit Records I hope haha.

On Pounding Warehouse I’ve gone for artists who make techno and acid techno, so of course there’s A.P. who the underground has known about for years and is now up there among the top of Beatport’s Top 100 hard techno artists.

Bad Boy Pete is on Pounding Warehouse 5 with his sound getting picked up by the likes of Perc.

Tassid & Eski released an absolute banger on Pounding Warehouse Vinyl Series, Tassid has been smashing it in Europe so I was very happy to get him on the vinyl release.

Acid Steve and his merchandise manager

Rats on Acid aka Pest Control has some quality acid and techno out on Pounding Warehouse, Avinit and loads of other labels.

Jack Majic is another to look out for, he is on Pounding Warehouse 006, and has a polished and pounding sound in productions and DJ sets.

Other producers out there doing acid and techno that spring to mind are OB1 (who has previously released on Avinit and does some incredible modular sets and releases), Rowland the Bastard – his percussion is something else when you hear it in the mix, L Self (proper twisted acid lines), Fil Devious (part of what is a banging Wales scene along with Sted Hellvis, plus of course A.P., Griff/High Voltage crew and Robi Suss who I mentioned already and Ceri Suss).

What are your future plans for acid techno and music in general?

Musicwise I’ve spent a lot of lockdown in a studio I finally got set up, and had some lessons from D.A.V.E. the Drummer which has been wicked and part of that resulted in a track. It will be out definitely on vinyl although at this stage I have no idea where or when.

Also got a remix coming out on Benji303’s Alliance Digital, plus a couple of other things to be confirmed, Avinit 008 came out not long ago as well and I believe is still available from all good vinyl pushers, with tracks from Biri N Chris Liberator, The Geezer, Bad Boy Pete, and me.

I also plan to organise a night although it’s hard to find underground venues what with developers fucking over London (that’s what’s behind my “Our streets, fuck Hondo Enterprises” track on Pounding Warehouse) and closing clubs like the 414.

Definitely will do something though, once it’s clearer what’s happening with lockdown being lifted. Hopefully that’ll be later this year, so to anyone still reading, I hope to see you there and thanks for making it this far down the interview!!!